Alessandro Siviglia was born in 1982 in Salerno, Italy. He started his artistic journey already in his teenage years, attracted by graffiti writing he expressed himself on the walls of his hometown and continued with this kind of street art for more than 15 years, tagging himself CROW. The years of study at the art institute “Filiberto Menna” of Salerno of course have been very useful and have built a solid foundation for his professional growth, but yet most important are the experiences he made on the streets, painting in different cities of Italy.

Its’ from his graffiti writing that he developped his very unique and personal style, his technique of using the colors and contrasts, his decisive and yet spontanous stroke of the brush, like throwing the characters on the canvas. In 2000 Siviglia moves to Venice where he gets to know some of the local artists, which brings him closer to painting on canvas. In this context he creates his first art works on canvas, for example “Il Fumador”. This work represents a man painted completely in black, without face but dressed with strong colors, sitting under a palm tree and smoking his pipe. In this painting the artist expresses his need for relaxation, the island as a place of refuge from the stressful city life.

In spring 2008 the artist gets to know a spanish girl that becomes his girlfriend. Siviglia decides to move to Spain with her, In Valencia he intensifies his new way of painting on canvas and gets the chance to expose his first art works. In the vibrant district of Valencia called Carmen, Siviglia loves to just observe the people, their way of life, the domestic animals and those that live on the streets, the typical colors of this part of the town, making them his own and transfering them on to canvas or other materials.

Thats when he paints il “Cangatto”, a very special and unique painting, that unfortunately has been stolen during an exhibition in Salerno shortly after. 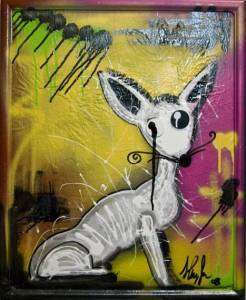 He starts to love painting with acrylic colors instead of only spray paint more and more. Also because in Spain he has not so many opportunities to go graffiti writing he slowly leaves this kind of street art and starts painting on everything he finds, like recycled wooden boards, old front doors or wardrobe doors.

This new way of painting is an important turning point for the artistic life of Alessandro Siviglia. He creates more figurative art works with more content and deeper meaning compared to his graffiti writing. Yet he loves to paint on large spaces and the size of canvases or boards are still limited. That’s why he would still look for bigger walls, like in abbandoned factories, where he can freely express himself and meet his need of wider rooms. Alessandro Siviglia still uses spray paint when creating his contemporary art works, in combination with acrylic and oil colors. It’s this very unique and personal technique that distinguishes him and makes his style immediatly recognizable.

After his father passed away in 2010, he left Spain and went back to his hometown Salerno to support the family. He continues with his new way of painting, creating more than 700 art works in only 3 years.

In 2013, while visiting friends in Milan, Alessandro gets to know his future wife and would eventually move to Rome with her in 2014. He starts to paint on a full-time basis, dedicating his time and strength to his art, moving with his studio from a kitchen, to a garage, to an own little studio in the district of EUR in Rome. Siviglia is growing constantly and his art works are evolving in every sense.

(“I’m thanking all the people that believe in me and support me in my work.

I’m thanking God who has given me this gift to create something that lasts using my hands, my heart and my mind.”)

go back to Home Page