Easy payment via PayPal and worldwide shipping. For info: sivigliart@outlook.it or via whats app to +39 3891245824

In this figurative painting we can see four characters. The king, as the usual protagonist in Siviglias paintings, sitting on a throne and giving audience to three different people. All three, hurrying to come before the king, are kneeling down. The first with the tie looks like a businessman, the second is naked and seems quite disturbed, the third character is a woman. The woman is carrying her wounded and bleeding heart in her hand as if she wanted to ask the king to heal it. What brought them before the king, what will they ask of him, what will they expect him to do? That’s up to the observer who should use his/her imagination, anyone can identify with one or more characters of this scene and dream his own story.
The colors used by the artist are quite simple, a strong contrast between the blue and orange that form the background where the scene takes place, whereas the figures are painted mainly in black and white with some highlights in red. 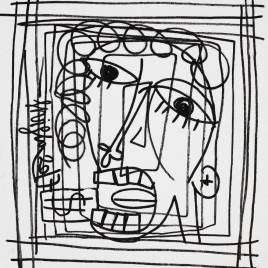 200€[:en]Original modern painting in black and white on canvas – mixed technique (acrylic, marker) Size: 35×35 cm. INCH: 14×14  – original painting, SINGLE PIECE Give your environment an exclusive touch with the original paintings of the contemporary artist Alessandro Siviglia. FOR DESTINATIONS OUTSIDE ITALY: The painting is shipped rolled up in a tube to avoid any kind of damage during the transport. It comes with the certificate of authenticity including the title, the year of creation and the signiture of the artist. FREE SHIPPING!!!    [:de]Dimensioni: 35X35 cm Tecnica mista su tela Anno 2017 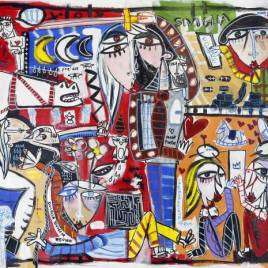 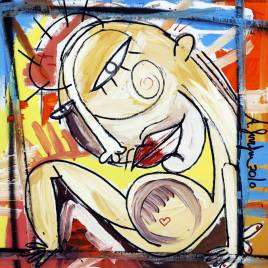 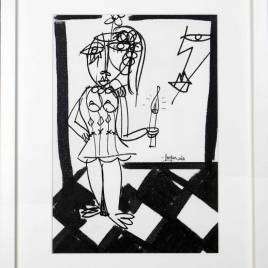 Express shipping - costs included Once you bought a painting, please leave your phone number and your email address in a private message for the shipping. CONTEMPORARY ARTIST ALESSANDRO SIVIGLIA[:de]