The painting represents the battle of Cocentaina. “Cocentaina is a small town in Spain located in the Valencian Community, one of the seventeen Spanish autonomous communities. The celebrations of “Moros y Cristianos” take place in August in honor of San Ippolito and are the oldest in the world (dating back to 1585) “(cit .: https://it.wikipedia.org/wiki/Cocentaina)
Siviglia was inspired by the celebrations and the history of this battle when he lived in Valencia, Spain and carried it forward all these years. He painted it on various occasions, “Mori contro Cristiani” or “La Battaglia di Alcoy” for example are dealing with the same historical event.
There is a series of Siviglias paintings with horse battles, knights and soldiers with armor and swords. All medieval scenes revisited in the unmistakable style of the young artist. The classic is combined with the modern, the past with the present. Energetic and dynamic works, life and death, victory and defeat, war and peace. 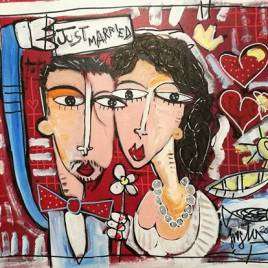 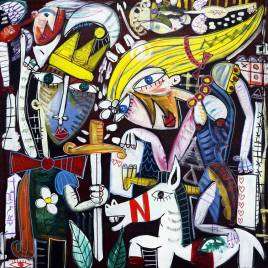 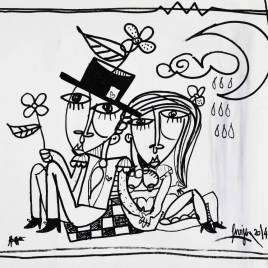 [:en]Original modern painting in black and white on canvas – mixed technique (acrylic, marker) Size: 40X45 cm - INCH: 15,7 X 17,7  – original painting, SINGLE PIECE Give your environment an exclusive touch with the original paintings of the contemporary artist Alessandro Siviglia. FOR DESTINATIONS OUTSIDE ITALY: The painting is shipped rolled up in a tube to avoid any kind of damage during the transport. It comes with the certificate of authenticity including the title, the year of creation and the signiture of the artist. FREE SHIPPING!!!